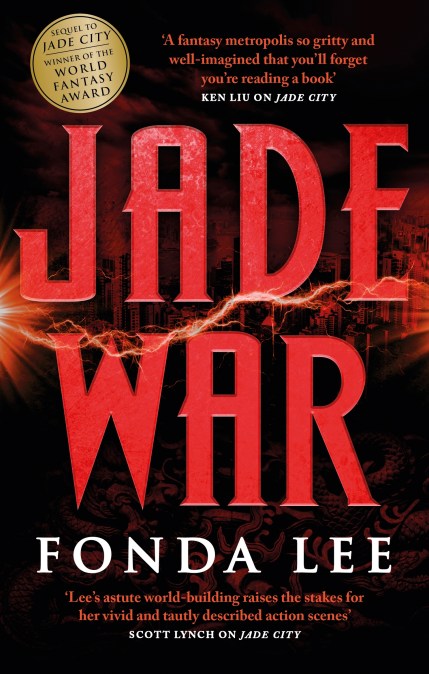 Blurb:
In Jade War, the sequel to the World Fantasy Award-winning novel Jade City, the Kaul siblings battle rival clans for honor and control over an Asia-inspired fantasy metropolis.

On the island of Kekon, the Kaul family is locked in a violent feud for control of the capital city and the supply of magical jade that endows trained Green Bone warriors with supernatural powers they alone have possessed for hundreds of years.

Beyond Kekon’s borders, war is brewing. Powerful foreign governments and mercenary criminal kingpins alike turn their eyes on the island nation. Jade, Kekon’s most prized resource, could make them rich – or give them the edge they’d need to topple their rivals.

Faced with threats on all sides, the Kaul family is forced to form new and dangerous alliances, confront enemies in the darkest streets and the tallest office towers, and put honor aside in order to do whatever it takes to ensure their own survival – and that of all the Green Bones of Kekon.

Jade War is the second book of the Green Bone Saga, an epic trilogy about family, honor, and those who live and die by the ancient laws of blood and jade.

Whenever I think of Jade City, I think of CW of The Quiet Pond (you should check out CW’s comprehensive review of Jade War here) and Shealea of Shut Up, Shealea, who have been championing Fonda Lee’s exceptional novel, Jade City, since forever and when I finally read it, I understood the hype and their excitement. I was also very pleased to be accepted into their own No Peak clan. And thanks to their warm welcome, I get to flail and get all emotional over everything that has transpired in the books.

First thing’s first, I’d like to give massive thanks to Shealea of Shut Up, Shealea and Caffeine Book Tours for the opportunity to be a part of the international blog tour of the spellbinding sequel, Jade War.

After having my beating heart wrenched out of my chest when I finished the epilogue of Jade City, I was eager to find out how Fonda Lee would ruin me in Jade War and I was right. Jade War is an astounding sequel and continuation of the series with higher stakes, bigger and badder fights and it delves deeper into the politics and webs of deception on the island of Kekon.

So what is to be expected from Jade War, you might ask? Tread carefully, dear friends, for you will be completely blown away by Fonda Lee’s latest triumph. Jade War was everything I expected from the sequel to Jade City and more because Fonda Lee has transcended all my expectations by delivering another heart-stopping story, layered with political intrigue between the warring countries and conflict that is rife between the clans in Janloon, namely the No Peak and Mountain clans.

When I was first introduced to the characters in the Kaul family in Jade City, I was ready to root for them as I love nothing more than morally grey characters and the Kauls are no exception. Having been burdened with clan business and living up to the legacy of the Kaul family in Jade City to dealing with the consequences of their actions and putting Kekon in the rightful position when war is brewing between the neighbouring countries in Jade War, you would think that they have enough on their plate. However, that is not the case when the plot thickens and Ayt Mada, the Pillar of Mountain clan proves to be a formidable foe again and again. With so many things coming into play, Jade War is a thrilling and gripping read that would keep you on tenterhooks.

As Jade City primarily focused on the Kaul family, I was glad that the spotlight in Jade War shone on the secondary characters such as Hilo’s wife, Wen, who a brave and determined Stone Eye (someone who isn’t affected by jade) who is now the wife of the Pillar, who was such a pleasantly unexpected addition to the plot of Jade War. I thoroughly enjoyed Shae and Anden’s chapters in Jade War as I felt that there was so much more that Fonda Lee explored with these two characters and by the end of Jade War, I even out-whooped myself for cheering them on. I loved the characters dearly and I thought that the books are well-balanced in terms of fleshing out the nuanced characters’ motivations and aspirations and in Jade War, it was great to see major character developments, such as Shae assuming the role of Lantern Man amid her struggles and challenges. I am sorry, but I just love Kaul Shaelinsan.

Jade War evoked many emotions in me as I was reading it and to endure all the trials and tribulations with the characters led to a massive payoff which made all the suffering worthwhile. Fonda Lee knows what she’s writing about and I would even daresay that Jade War is a masterpiece, weaved impeccably with diverging subplots which are tied up nicely in the end. A thrill from start to finish, Jade War promises a story that understands the meaning of family, honour, sacrifice and duty and it is one of the best urban fantasy books I’ve read. Now that Jade War has set the bar so high, only Fonda Lee could best herself in writing another book worthy of the Green Bone Saga.

Fonda wrote her first novel, about a dragon on a quest for a magic pendant, in fifth grade during the long bus ride to and from school each day. Many years later, she cast her high school classmates as characters in her second novel, a pulpy superhero saga co-written with a friend by passing a graphing calculator back and forth during biology class. Fortunately, both of these experiments are lost to the world forever.

Fonda is a former corporate strategist who has worked for or advised a number of Fortune 500 companies. She holds black belts in karate and kung fu, goes mad for smart action movies (think The Matrix, Inception, and Minority Report) and is an Eggs Benedict enthusiast. Born and raised in Calgary, Canada, she currently resides in Portland, Oregon.

Check out the kick off post by Shealea here and do yourself a favour and check out the other blogs in the tour!